The ability to predict, explain, and change the behavior of other humans has long been of interest to both the scientific community and the business world. Decades of research has made great advances in improving our understanding of human behavior online and offline, especially with the advent of social media. Predicting how individuals will react to future social, political, and economic events can be challenging and complex, however. More importantly, providing an explanation as to why such behavior occurs and determining if it can be changed is even more challenging as this would require extensive and detailed profiling of individuals over time.

The overall objective of this research is to develop a predictive system that enables stakeholders (e.g. policymakers, politicians, celebrities, and business organizations) to know how people will behave in the future and that provides a solid understanding of these behaviors to help stakeholders’ strategic planning. In particular, we will exploit past behaviors to predict future behaviors as the former are considered to be vital for personalization and recommendation systems but are yet to be explored in public opinion and human behavior studies.

The specific aim of this research is to develop a system that predicts behaviors (i.e. sentiments and stances expressed by individuals on social media) regarding a future news event based on the individuals’ background factors and past behaviors and provides an explanation of the predicted behaviors with detailed user profiles.

This research makes empirical contributions to both the social science and computer science fields. Specifically, it advances the state of knowledge regarding how individuals’ intrinsic and extrinsic characteristics and past behavior determine their future behaviors, how human behaviors are connected to each other, how to model news events and individual behaviors (sentiments and stance regarding a news event) on social media, and the extent to which individuals’ intrinsic and extrinsic characteristics and past behaviors can determine their future behaviors. The resulting system will enable us to have a precise understanding of what makes the public happy, concerned, angry, and prone to act so that better solutions can be provided for the stakeholders and the risk of a bad reputation can be reduced.

Singapore is well-known as a multiracial and multicultural society. Integration and cooperation in such a society depend on the perception of “self” and “the other.” Those perceptions, however, can be easily influenced. It is not surprising that media is one of the important sources that influence people’s perception of the other since people spend a considerable amount of time on media consumption. Their perception of, belief about, and attitudes toward the other are constantly shaped by the mediated images in the media. With the high penetration of smartphones, the term “media” not only refers to traditional mass media, but also extends to social media and online games with which people actively engage in their everyday life. Media’s influence thus becomes more powerful. Understanding the impact of media, for example, how media portrays each demographic group, is therefore a crucial step toward social integration.

While many social science scholars have studied diversity and fairness in media, most of the studies are conducted on a small scale and have not built working systems to illustrate the updated status of media practice. Consequently, these studies have not provided an easy-to-use tool to raise the public’s awareness of diversity and fairness in media and missed opportunities to transform the public into watchdogs on media. 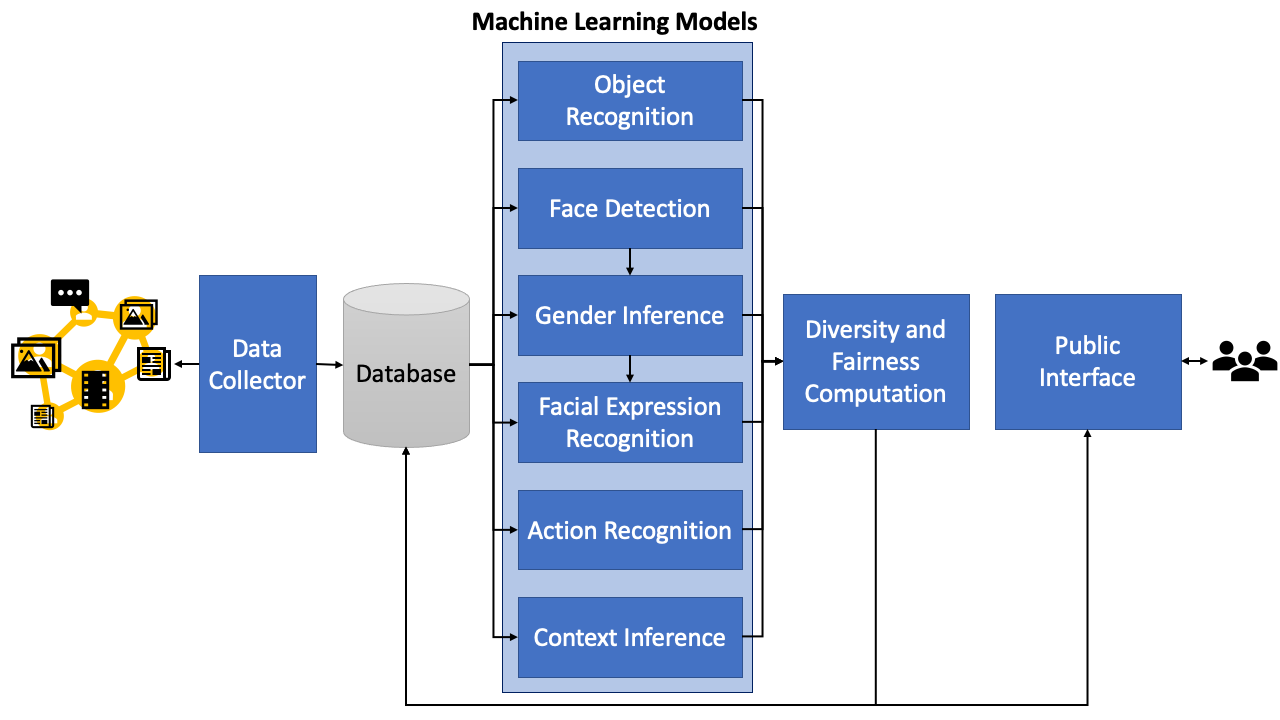 We will break down the computational modeling of gender diversity and fairness in social media posts into a series of multimodal machine learning tasks, such as gender detection, stereotype detection, and context inference. There have been many studies on some tasks (e.g., gender detection); however, other tasks (e.g., stereotype detection) are challenging. For the former, we will explore and utilize relevant libraries or training/testing data. For the latter, we will build a codebook, label the data, and train the multimodal machine learning models.

Contemporary media systems are in transition. The constellation of organizations, groups, and individuals contributing information to national and international news flows has changed as a result of the digital transformation. The “hybrid media system” has proven to be one of the most instructive concepts addressing this change. Its focus on the mutually dependent interconnections between various types of media organizations, actors, and publics has inspired prolific research. Yet the concept can tempt researchers to sidestep systematic analyses of information flows and actors’ differing degrees of influence by treating media systems as a black box. To enable large-scale, empirical comparative studies aimed at identifying interdependencies and power relationships in contemporary media systems, we propose the concept of discursive power. This describes the ability of contributors to communication spaces to introduce, amplify, and maintain topics, frames, and speakers, thus shaping public discourses and controversies that unfold in interconnected communication spaces. We also provide a theoretical framework of how structural features of organizations and media systems contribute to the emergence of discursive power for different types of actors in various contexts. This adds to the theoretical toolkit available to researchers interested in the empirical analysis of contemporary media systems.